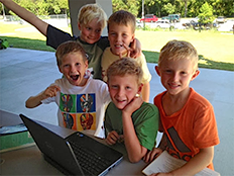 Why does Tyler, Texas need an Acton Academy?

Because my four children are on a hero’s journey, and yours are too.

When I began my career as an educator 13 years ago, I would never have expected that my journey would lead to starting a school like Acton Academy Tyler. My first four years of teaching were in a classical school, where innovation was not sought and often even felt discouraged. The students spent 85-90% of their days sitting in desks, listening to lectures and regurgitating facts. It’s true that some students thrived, but it’s also true that many were miserable. I remember hearing an administrator say “In this world we have two groups: ‘farmers and scholars’.” He then told a set of parents that their child, my student, was probably not in the “scholars” group. I remember this feeling of immense sadness – knowing the student had amazing gifts and strengths, all of which were being ignored. I knew at that moment this wouldn’t be the school my own children would thrive in, and I started planning our exit.

Not long after I was able to get a teaching position at one of the best private schools in the Tyler area. There, the students were able to have a little bit more freedom in the classroom, but 60-75% of the day was still spent sitting in desks listening to lectures. Again, some students thrived in that environment, but many did not. My oldest daughter was one of those who thrived. My other two daughters, though they were excelling by academic standards, were miserable. I could see their creativity and love of learning dwindling. So, I started planning our next exit strategy.

This is the moment I decided to open up my own microschool. My oldest continued to thrive in private school, and daughters #2 and #3 began homeschooling with me. Over the next couple of years, my microschool evolved to a place for student athletes whose training kept them from going to a traditional full day of school. In this new setting innovation wasn’t just encouraged, it was required. I saw these students thrive not just in their education but also in their ability to problem solve and relate to the people around them. It was during these last five years researching how to continue improving this microschool environment that my family found our educational home, Acton Academy.

When I first read about Acton Academy in Austin, I was immediately intrigued. This school was amazing. Just from watching the videos and reading the blogs I knew that I had to figure out a way to get my own kids into a school like that. Why? Because each person that walks through the door is considered to be a genius on a hero’s journey. Each learner is highly respected and given the room to grow. They are allowed and even encouraged to fail early and fail often. They know failure is an important part of growing and learning.

From the moment I stepped onto the campus at Acton Academy Austin, I felt energized. The learners were filled with joy. They were respectful to everyone around them. They were kind. They were pursuing knowledge – not because they had to, but because they loved to. This is the type of environment my own children deserved. One in which their gifts are cherished, and their hard work is celebrated. One where the standard is mastery, and no student is ever written off.

Like all heroes, my journey started with a problem. Tyler is a four hour drive from Austin, but I’ve never let a little problem like that stop me! So here we are. I’m starting Acton Academy Tyler. I know Tyler is full of heroes who are also ready to start their journey, and change our world for the better.

Is your family ready to start a hero’s journey?

Hi I’m Erica! Wife, mother of four, lifetime learner and Head of School at Acton Academy Tyler. Follow me on my hero’s journey!